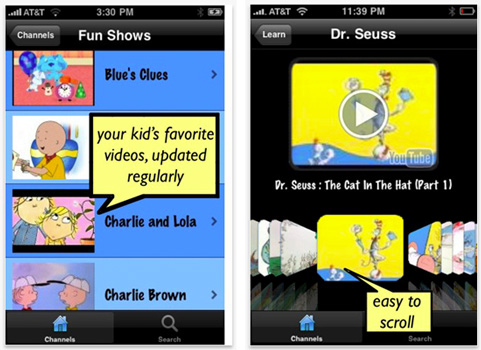 While developing WeetWoo! for iPhone we spent an extraordinary amount of time putting ourselves into the shoes of our children. Of course, since they are OUR children, we didn’t hesitate to ask them what they thought at every turn. And being children, they didn’t hesitate to tell it like it was. In fact, some of the most valuable lessons we learned came from plopping an iPod Touch down in front of 3 and 9 year olds and letting them go.

It’s amazing how tricky it is to make something truly usable by a broad range of kids. One of my favorite details is something you’d probably never notice. In the "Album Art" view where you scroll through all of the videos in a playlist, younger kids were having problems because they couldn’t get to the video they wanted to see. It turns a few of our testers’ fine motor skills just weren’t developed enough to drag and stop at a specific video – they kept overshooting and getting frustrated. So we tuned down the scrolling speed, but then the older kids complained that it was too slow and took too many swipes to get through a long list. After kicking around ideas for a while we came up with what should have been obvious all along – make it slow for the young kids and fast for the older kids.

Hang on! Were we talking about adding yet another item to our already crowded and complex settings panel? Bad idea.

Another brainstorm, another "Duh, that’s it, why did THAT take an entire 5K run to figure out?"

Weet Woo already classifies videos into age ranges and lets you pick an age range.
We’ll just piggyback off of that setting.

So we try a bunch of speed settings for the scrolling effect, settle on one for each target age range – 3-5, 6-8, and 9+ – and we’re off to the races. It’s not something you’d necessarily ever notice, but it is something that improves the experience for our entire spectrum of target users. And that makes me smile.

Attention to detail, removing frustrations that anyone would probably live with, also makes your users happy. The app reviews speak for themselves… Common Sense Media, Best Kids Apps.